The Black Madonna of Tindari and the Art of Emanuele Crialese

The origins of the Black  Madonna of Tindari are unknown, but the statue is believed to be of Byzantine origin, likely smuggled out of Constantinople in the eighth and ninth centuries. Legend tells us that the ship it was carried on encountered a storm at sea  and was forced to seek refuge in the port of Tindari. When the ship tried to set sail following the storm it could not be moved until the statue was removed and taken to shore.  Miracles are attributed to the Black Madonna and to this day it holds a special place in the hearts of many Sicilians. The Latin words “nigro sum sed formosa” (black I am, but beautiful) are inscribed at her alter and the hauntingly beautiful face of the Madonna and her child Jesus are simply unforgettable.

The image of the black Madonna appears not only in art history but in depth psychology as well. The image is deeply mystical in nature and its symbolism is rooted in the psyche’s connectedness to the earth and to matter (also read as “mater” or “mother”).

These mysterious statues of the Virgin Mary, which are found throughout Europe, are not ethnically black, and many believe they are later representation of the goddesses Isis and Demeter whose cults were wide-spread in antiquity throughout the Mediterranean.

The image of the black Madonna also appears in the cinematic art of Italian film director Emanuele Crialese, whose deeply moving film Terraferma, was featured in this season’s line-up at the  San Diego Italian Film Festival (here)

Terraferma is the story of people willing to risk everything in search of a better life.  Infinitely complex in its imagery and symbolism, the story unfolds with simplicity and directness—a style of storytelling reminiscent of Sicilian oral traditions, most notably the Sicilian marionette theater, l’Opera dei Pupi.  Not coincidentally, one of the movie’s central characters Ernesto, played by Sicilian actor Mimmo Cuticchio, is in real life a puppeteer with the Opera Dei Pupi.


The story takes place on the island of Linosa, part of the Pelagie islands of southwestern Sicily. Small and economically insignificant, these islands have been placed in the eye of an international storm in recent years, which has divided the European community. An Italian outpost in the heart of the Mediterranean--a mere 100 kilometers from Tunisia--Linosa and its neighbor Lampedusa, are the first waypoint for many illegal immigrants from Africa making their way north to Europe in search of a better life.

Terraferma, which means “dry land” is the story of a family struggling against the turmoil of a changing world, to uphold a culture and life that can no longer support them. The elderly Ernesto and his grandson Filippo, desperately defend their trade as fishermen, denying their own growing recognition that the sea can no longer support them. But the winds of change are undeniable. The island’s economic situation grows dimmer, as the dying fishing economy gives rise to mindless tourism that cares little for the island, but seeks only to exploit it. 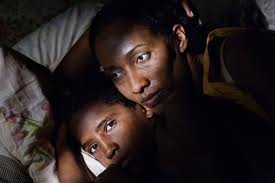 While fishing, Ernesto and Filippo encounter refugees at sea in peril of drowning. New edicts handed down from European lawmakers forbid them to give aid to boat people and Ernesto and Filippo are faced with the unthinkable choice of either allowing them to die unaided, or to face criminal charges by taking them on board.  The “law of the sea” and their own unhesitating sense of right and wrong prevail and they help the drowning refugees.
Among those saved, are an adolescent boy and his pregnant mother, Sara, poignantly played by the beautiful Timnit T, who in real life was a refugee herself from Ethiopia, and who Crialese met in a refugee camp while filming in Lampedusa.  Ernesto and Filippo bring Sara to their home where she gives birth to a baby girl with the help of Ernesto’s daughter in law, Giulietta.﻿

The character of Sara is a kind of shadow sister to the story’s main character, Giulietta, played by the Donatella Finocchiaro.   Giulietta has lost everything to the sea—her husband a fisherman, was killed 3 years earlier and she despairs at ever being able to create a life for herself and her twenty-year old son Filippo.  She dreams of leaving Linosa and migrating north to western Sicily where they can find work and begin to rebuild their lives.
When Sara enters her life, a frightened Giulietta is forced to examine her own life and aspirations through the plight of this tragic figure. Although she would like to rid herself of the burden the unwelcomed visitor has placed on her, she finds herself unable to simply turn away. Eventually Giulietta comes to understand that by saving Sara, she is in fact saving herself.
Strong and wise, but deeply human and vulnerable, Giulietta embodies the archetype of the Great Mother—she is the symbol of the Virgin Mary firmly planted in wisdom and compassion. Her ability to act humanely despite paralyzing fear, suggests a union of opposites and symbolizes the mitigating role that the feminine must play if there is to be wholeness and healing in the world.

In contrast to Giulietta, the character of Sara embodies the Black Madonna, an archetypal image that Crialese, who is of Sicilian origin, would be familiar with. Sara’s haunting face and infinitely compassionate eyes have seen great suffering. Yet despite her anguish, her character is nurturing, gentle, forgiving; she is of the earth, rooted in her physical being like the Black Madonna of Tindari. Giulietta and Sara are mirror images of one another—one ascending toward the heavens, the other rooted in the earth and together, they bring healing to the world.

Crialese’s Black Madonna is archetypal because she transcends the personal hell of her life’s journey --not by giving up-- but by embracing life fully in all its sorrows and its joys. Sara symbolically jumps into the hell fire of life trying to save herself and her son, just as she literally jumps into the roiling waters of the Mediterranean without a life preserver, in an ultimate act of baptism and salvation. Crialese’s message is quintessentially Sicilian—to live is to embrace life fully with all its joys and sorrows.


Thanks for reading and … Ciao a presto!
Posted by Rosetta Sciacca

Rosetta Sciacca
Rosetta Sciacca Volkov was born and grew up in the western-most part of the island of Sicily, in the ancient Phoenician settlement of Marsala. True to the spirit of her adventure-faring Phoenician ancestors, Rosetta emigrated to United States, returning to Italy some 10 years later and settling in Rome. She returned to the U.S. for university and later began her family there, but has never drifted far from her Sicilian roots. Educated in both countries and immersed in the culture and language of each, she seamlessly bridges both worlds. Rosetta's profound love for and attachment to the traditional ways of her native Sicily, along with its cuisine, literature, history and visual and performing arts, represent an important part of her life. Currently she js studying oil painting in New York, perfecting her craft. Painter, writer, chef and businesswoman, Rosetta and her husband, Michael Volkov, divide their time between California, New York, and Marsala, Sicily.